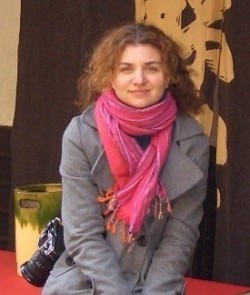 The Great Life Story of the Body of Buddha: Re-examination and Re-assessment of the Images and Narratives of the Life of Buddha Shakyamuni

Dessi Vendova is an advanced Ph.D. Candidate who entered the doctoral program in Religion at Columbia University in 2012 in the Buddhism sub-field. Dessi began her academic study of Chinese and Chinese studies back in 2000 enrolled as an undergraduate student at the Chinese Studies Department of Sofia University, in her native Bulgaria. In the Fall of 2001 with a full government scholarship she went to Beijing, China, where for the next 8 years she lived and studied, 7 of which she was enrolled in the Department of Chinese Language and Literature of Peking University where in July 2006 she received her BA in Chinese Language and Literature and then in July 2009 she received her Master of Arts degree in Classical Chinese Literature specializing in the pre-Tang and Tang dynasty period.

After her graduation from Peking University, Dessi lived in Kyoto for 3 years where from October 2009 until April 2011, with a Japanese Government Research Student Scholarship (Monbukagakusho), she was enrolled as a research student in the Graduate School of Letters of Kyoto University.

For several years, Dessi has mainly researched the connection between Classical Chinese stories, Buddhist texts, and Buddhist “former birth stories” (jatakas) in particular. In both her BA and MA graduation theses (written in Chinese) she researched this topic and found it especially intellectually exhilarating and challenging and eliciting a passionate commitment. Her doctoral dissertation draws inspiration from some of the themes she began exploring during her studies in China, but has incorporated art historical and religious studies methods, and is more focused on the exploration of the stories about the Buddha’s life and the religious practice and art it inspired.

Dessi’s dissertation project is an interdisciplinary study linking Buddhist studies, Buddhist narrative texts, art history, and archaeology and re-examines the life of the Buddha in Indian, Central Asian and Chinese Buddhist narratives and art. Her dissertation, “The Great Life of the Body of Buddha: Re-examination and Re-assessment of the Images and Narratives of the Life of Buddha Shakyamuni,” bridges disciplinary boundaries by bringing together evidence from the fields of Buddhist studies, literature, art and archaeology. This transregional study examines hitherto unexplored connections between the stories of the Buddha’s lives, the Buddha’s body textual and visual depictions, and puts forward a hypothesis of how that connects to the iconographical programme for the construction of early Buddhist sites such as stupas and rock-cut caves from India, through Central Asia to China, with primary attention devoted to the period between the third century BCE and the sixth century CE.