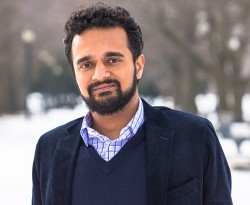 Yogi Trivedi is a scholar of religion and media. His doctoral research looks at earlier forms of media and their role in transmission and community formation in bhakti (devotional) communities of early modern and colonial North India. Trivedi was recently awarded the prestigious Fulbright-Hays Fellowship to carry out fieldwork in furtherance of this project. Prior to commencing his doctoral work at Columbia University, Trivedi was a reporter, anchor, and producer for WCBS Newsradio 880, CBS News, and NY1. He has also worked as a press secretary for several public officials in New York and Washington. He is currently an Adjunct Professor at the Journalism School and a Teaching Fellow in the Department of Religion.

Trivedi has written for The New York Times, The Huffington Post, The Associated Press, and The Atlantic. His experience as a journalist and academic is enhanced by his work in the non-profit sector. He has helped multinational non-profit organizations in Europe, South Asia, and North America develop publicity campaigns and build press relations infrastructure for their humanitarian initiatives.

At the Journalism School, Trivedi works closely with Professor Ari Goldman to teach the "Covering Religion" seminar as part of the Scripps-Howard Program. He encourages students to increase religious literacy and develop a nuanced understanding of various faiths. His teaching approach focuses on highlighting the dialectical relationship between religion and media--how each has affected the other and undergone a transformation as they become increasingly co-dependent in our digital world. He specializes in teaching religion(s) to journalists and journalistic skills needed to cover religion(s).

Trivedi’s latest book is the first-ever biography of the North Indian spiritual leader and social reformer Swaminarayan (1781-1829). His scholarship is enriched by his training as a lecturer and musical performer of bhakti poetry and classical and devotional North Indian music. He has trained with various internationally acclaimed classical and folk musicians, such as Padma Vibhushan Pandit Jasraj and Gujarati ghazal maestro Purushottam Upadhyaya. He has performed around the world at celebrated venues: Radio City Music Hall, Alexander Palace, Carnegie Hall, and Lincoln Center.