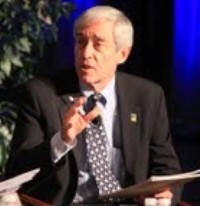 George Rupp is a distinguished visiting scholar at Columbia’s Institute for Religion, Culture, and Public Affairs and an adjunct professor of religion, public health, and international affairs.

Dr. Rupp served as President of the International Rescue Committee from 2002 to 2013.  As the IRC’s Chief Executive Officer, Dr. Rupp led a staff of more than 12,000 colleagues and oversaw the agency’s relief and development operations in over 40 countries and its refugee resettlement and assistance programs in 22 cities in the United States.  During his tenure, the budget of the IRC tripled (to over $450 million).  The IRC also closed out a $60 million capital campaign at $110 million.  Along with the growth of programs in service delivery, advocacy efforts were increased in Washington and New York and also in London, Brussels, Geneva, Nairobi, and Bangkok.

Before joining the IRC, Dr. Rupp served as president of Columbia University. During his nine-year tenure, he focused on enhancing undergraduate education, on strengthening campus ties to surrounding communities and New York City as a whole, and on increasing the university’s international orientation.  Earlier, Dr. Rupp served as president of Rice University and before that was the John Lord O’Brian Professor of Divinity and dean of the Harvard Divinity School.

Educated in Europe and Asia as well as the United States, he is the author of numerous articles and five books, including Globalization Challenged:  Commitment, Conflict, and Community (2006).

George Rupp and his wife Nancy have two adult daughters, both professional anthropologists, one with a specialization in Japan and the other with a focus on Africa, and six grandchildren.